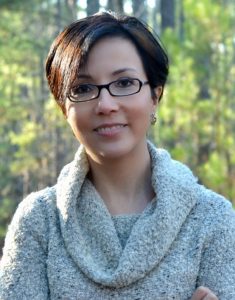 Let’s welcome Dr. Eugenia Conde to the Odum team! After receiving her doctorate at Texas A & M, Eugenia was appointed as a statistical advisor helping students with quantitative methods for their dissertations while doing her own postdoctoral research at Rutgers University. Before joining the Odum Institute, she worked for more than five years as a quantitative analyst and statistical consultant at Duke University’s Medical Center and The Samuel DuBois Cook Center on Social Equity.

Eugenia grew up in Mexico in a very culturally diverse environment. The first few years of her life she lived in an indigenous community called Hñahñu and later moved to an area heavily influenced by Lebanese, Italian, and British immigrants before immigrating to the United States to study English and finish high school at age sixteen. She attended high school in Boston and then continued to further her education at Clark University, majoring in psychology and minoring in philosophy. In her path to find a Ph.D. degree that fits her interests, she completed a Master’s in education at the University of Texas at Austin and an MSPH in epidemiology at the Texas A&M Health and Science Center. She later went on to pursue her Ph.D. in sociology with a focus in demography with a minor in medical sociology.

Since Eugenia was a child, she has liked numbers. Her grandmother had a small school supply store where she spent all her afternoons helping out. Her “abuelita,” as she called her in a term of endearment, calculated the charges and changes in her head; consequently, Eugenia learned to do the same. It came easily and was fun for her.

In her current role, Eugenia is a statistical consultant, she advises students and faculty on their statistics and research design questions. Her priority is to address the needs of all the students and faculty that she helps. Therefore, it is important for her to continue advancing her quantitative skills. She believes that one of the best methods to learn and keep up with the new research and literature in statistics is through teaching. This semester she will be teaching short courses in Stata, logistic regression, and Structural Equation Modeling (SEM).

Eugenia’s areas of interest are missing data and quantitative methods to study communities and people of color (POC). Eventually, she hopes to introduce a curriculum about the different methodologies used to understand POC and immigrants. She believes that many statistical techniques and methodologies fail to capture the experience of these groups. For example, she became interested in missing data when she started working on her dissertation and she realized that the data for her dissertation were missing more than 25 percent income values.

The original objective of her dissertation was to analyze the differences in fertility rates between Mexican-origin and white adolescents in the United States. However, she explains that as a sociologist, she could not ignore the importance of income data, as many do. On that account, she took it upon herself to learn what were the best statistical methodologies to address the problem. Through her work, she realized that using inappropriate, but widely used, methods to handle missing data can lead to questionable statistical conclusions. More specifically, she found that these methods estimated that the fertility rate for Mexican-origin adolescents was significantly higher than for white young women. On the other hand, when she used one of the “gold standards,” to deal with missing data, i.e, multiple imputations, the differences between the two groups disappeared.

In her free time, Eugenia likes to read classic novels and books on animal behaviors. She loves dogs and cats and has six of her own; two cats and four dogs (a Maltese, a mini-schnauzer, and a Pomeranian). She got two of them at the beginning of the pandemic and since then has been learning how to groom them on her own. She also loves North Carolina’s parks and trails; her favorite weekend activity is biking and walking with her husband and dogs when the weather is nice.